In late October, we made a 5-night trip to Tunis, the capital city of Tunisia. It was our first time in North Africa, and our first trip to an Arab country.

Why we visited Tunis

When you think of touring North Africa, do you think of a trip to Egypt or Morocco? Well, Lee and I like to look into destinations that are not at the top of every tourist’s mind—as long as they are open to visitors. (For instance, the first time we hiked in the UK, we went to Wales for the Offas Dyke Trail, when most people would probably pick Hadrian’s Wall.)

The city of Tunis is on the Mediterranean coast and it has a lovely Mediterranean climate that is quite tolerable in late October. We also wanted to visit Carthage, the ancient city that is now a suburb of Tunis. It’s also right on the coast.

We learned that tourism is a key element of the Tunisian economy. But lately, tourism in Tunisia has been suffering a decline. If we’re going to spend some travel money, Tunis would be a good ethical choice. 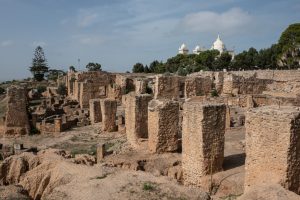 Carthage was the most powerful trading centre in the Mediterranean until it was taken over by the Romans after the Punic Wars. Following the invasion of the Vandals, which took place around the same time as the fall of Rome, Carthage was ruined as Tunis sprang up. Fortunately, the ruins were ignored for hundreds of years, so the structural remnants of the Romans—the cisterns, aquaduct, baths, patrician housing, columns, old streets, and many, many mosaics that are still on the ground—are in great condition.

Even the relics and ruins of the Punics, the civilization that was conquered by the Romans, can be explored in Carthage. 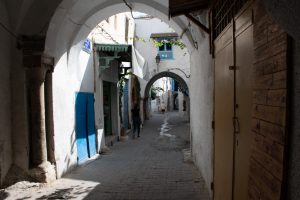 Founded in 698, the Medina is the walled heart of Tunis. It contains mosques, palaces, souks, and homes for thousands of people. Naturally, the narrow passages accommodate only pedestrians and the occasional scooter.

Handmade Berber carpets and jewelry. I have a story about that. 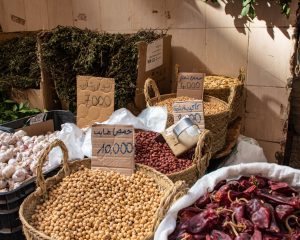 With Tunisia historically at the trading crossroads, the cuisine is influenced by French, Roman, Andalusian, Turkish, and Jewish, in addition to native Berber. The style is spicy Mediterranean with emphasis on fish and lamb and accompanied by lots of local fresh vegetables and fruits.

Even though the population is 98% Muslim, Tunisia is a wine country. Tunisia has been producing wine since the Phoenicians established Carthage. Seventy percent of wine produced is rosé. 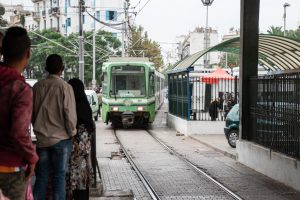 The core of the city is very walkable. For the outer areas and suburbs, the city is well served by a light rail system, which they call trams, and buses.

French and Arabic are the official languages and English is spoken by many younger people. If you know tourist-level French, you’ll be fine.

Is Tunis safe to visit?

We booked our trip a year ago, when I was already confident that Tunis would be culturally and politically safe and “normal” according to my standards. Compared to other places in this part of the world, it didn’t stand out as a country threatened by terrorists.

And even after the three suicide bombings in June this year, I was still feeling good about the trip, as I was confident that they would step up their security. (Compare this to Toronto, which had two massacres, not terrorist-related, and a number of innocents caught in the crossfire of gang shootings in just the last two years.)

It was only during and after the trip that I dug into the country’s political mood. I learned that Tunisia is widely regarded as the sole success story of the Arab Spring. And the move to democracy seems to have taken hold for good.

One of the outcomes of the revolution was the removal of the dictator, Zine El Abidine Ben Ali.  In 2014, Beji Caid Essebsi became the president in the country’s first democratic election.  Essebsi died this summer at the age of 92, and the country elected, again democratically, Kais Saied, who captured 72% of the vote in the presidential runoff on October 13.1

The new president was formally installed while we were in Tunis, and we have a story about that.

A country’s focus on rights and freedoms can also be an indicator of whether a visit will be enjoyable.

Tunisia has the most progressive policies on women’s rights in the Arab world, earning it the designation “Capital of Arab Women” for 2018/2019 by the Arab Women Commission. (A Tunisian man we chatted with was very proud to tell me that polygamy has been banned since 1956.) In 2018, Tunis elected their first woman mayor, Suad Ibrahim.

There are no laws concerning Islamic dress, with the exception of the niqab (full-face covering). It’s been banned from government institutions since the suicide bombings in June. I found it interesting to read that in response to the ban, an activist with the Tunisian League for the Defence for Human Rights “asked the government to ensure the measure was temporary.” As he told reporters, “We are for the freedom to dress, but today with the current situation and the terrorist threats in Tunisia and across the region we find justifications for this decision.”2

During the trip, I had no concerns about “sticking out” in my western clothing…except on our first day, but I’ll talk about that later.

Moving from dictatorship to democracy can be a bumpy ride. We saw this in the former Bloc countries after the fall of the Soviet Union. But what do Tunisians think? In a poll taken after the 2014 election, only 38% agreed with the statement “Democratic systems are not effective at maintaining order and stability.” Fifty-three percent disagreed and 9% weren’t sure. However, 87% of respondents agreed that, although democracy has its problems, it is better than other forms of government.”3

No doubt, Tunisians remember keenly what life was like under dictatorship. Their faith in democracy is refreshing, and contrasts with the growing cancel culture in Canada, U.S., and many European countries.

It makes me love Tunisians even more.

In my next post, I’ll tell you what I discovered about the character and the culture of the city—stuff you’ll never read in a tourist guide.